Auckland has been brilliant, as they say. Our host actually sent her son (Graham)and daughter in law to pick us up from the airport. That was a first, usually we are just given instructions on how to get where we need to be. We soon found out why, there house was in a beautiful neighborhood, but it was quite away from the city. We were a bit nervous about that, do to our inability to get transportation, but soon found that our host (Liz) was leaving us far from stranded.

Not only did she provide our meals, and shelter, but she also took us to wonderful events that we would have never experienced on our own. First was her granddaughters birthday, where we experienced a genuine kiwi bar-b-que (New Zealanders are affectionately known as kiwi’s). We followed this family get together with a get together of a much larger scale. Liz took us to an event that we would have never found on our own, a concert in the park. It was free, but magnificent. They really put on a show worth writing home about. 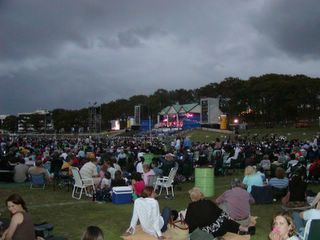 Concert in the Park

The concert began with operatic types of music, featuring up and coming New Zealand singers, but progressed to Symphony backed classic rock when the sun went down, with songs from the Beatles, Led Zeplin, and Earth, Wind and Fire.

The show progressed through a laser show and fire works ending with Tchaikovsky accompanied by fire works and cannons. It was quite a sight, and though free they did ask for donations in support of a local hospital. We gladly pitched in.

The next day in Auckland was divided between a flea market which Liz’s brother Clem took us to, and a wine festival that she shared with us later in the day. The flea market was great, just as Clem had promised. I found a Maori weapon known as a patua, I had been wanting one since I saw the Maori war dance at the Polynesian culture center. Joy got some traditional jewelry, including a necklace for me that is made from New Zealand greenstone, a material that is rare even in New Zealand, but nearly impossible to find elsewhere. I also bought a cheap hat, there’s a hole in the ozone down here, and you can burn to a crisp pretty quickly. 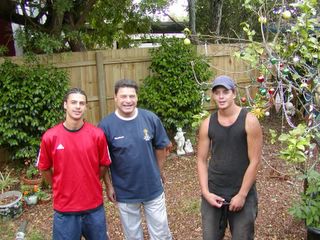 
The wine festival was heavenly. We crossed on a ferry to Devenport, then spent the afternoon sitting in the shade, listening to bands, and drinking wine with Liz, her daughter Erica, and their friend Francis (Clems ex-wife but everyone is very amicable). 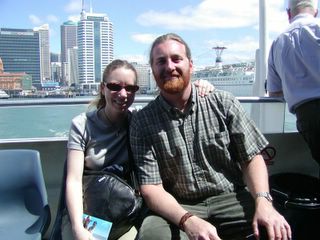 The Ferry to Devonport 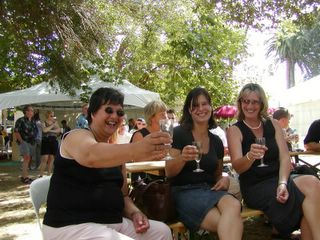 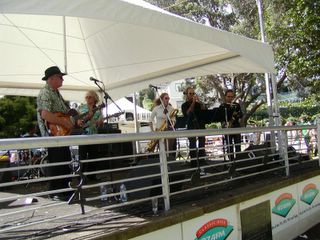 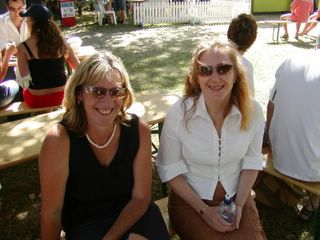 We were heading back home when we were detoured into an Irish pub where we met one of Liz’s nurse friends (Liz is a mental health nurse) and her Irish husband. His brother was with him, and before we knew it they had bought pints of dark (almost black) Irish beer for everyone. 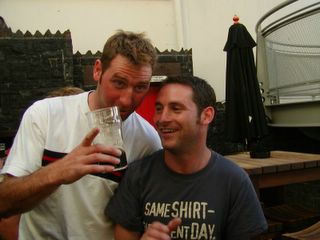 A Couple of Irish Brothers

Soon we had attracted another Yank (that’s what Americans are known as) that moved from New York to New Zealand two years ago. He kept the pints flowing. I don’t know if I could survive actually going to Ireland! 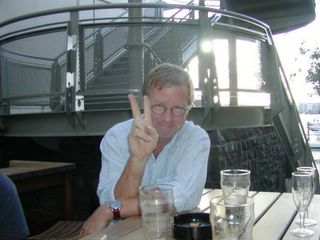 Anyway, now we’ve left the comfort of Liz’s home and we’re off to Hamilton. After a two hour bus ride, a bit of a nap, and a walk-about to find food in which it didn’t dawn on us that we had taken a wrong turn until our walk home started to seem quite twilight zone “it sure seems like the trip back is taking longer than the trip up there.” So know we’re sitting in a hostel known as J’s Backpacker (the first shelter we’ve had to pay for this trip) writing this up and planning our day at Hobbiton tomorrow. So far, I would say New Zealand has been brilliant! 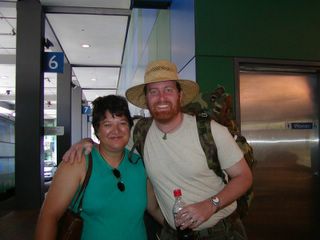 Our Wonderful Host Liz and Me

Wow, you have a fantastic blog here! Great pictures. :D

They call you "Yank's"??? Did you tell them heck no, we're from the south. Just kidding.

Hey Tanner and Joy Didnt think you were leaving for another few weeks. I meant to call you and send you a present before yall left. Keep posting to the blog...

Hey you two! GREAT BLOG!Looks like UR having a wonderful time and getting a massive infusion of culture.
Have you seen any solar energy or wind energy in any of the places you've visited?
Stay safe! We all love and miss you.
KEEP WRITING!

Good Morning! It's a cool, rainy morning here, and how refreshing to read your descriptions of where you have been, and the things you are doing and seeing!
Joy, I enjoyed your description of Sydney Harbor. It definitely showed your interest in museums and art galleries. I know you are having a very good time! The people you are meeting seem to be very friendly and nice! Going the way you have makes it possible to get to know these people. What an advantage! Your descriptions of the things you have done since you got to Aukland are very interesting! The photos are great, too. More and more people here are mentioning your Blog to me, so you must have a good following! Keep up the good work!You will have the basis of a great book by the time you get home!
Love, Gram

The trip seems to be oustanding thus far. What a great experience for both of you. It is wonderful that you are taking the time to share it with all of us. I look forward to your next update.