It is no bad thing to celebrate a simple life.

Our day started a bit rough with both of us again stepping out into traffic (at different times) because we looked the wrong way. I don’t know if we could ever get used to people driving on the left hand side, even if we're here for quite a while. When we did finally make it to the bus station, our adventure was underway.

It was a nice hour long bus ride from Hamilton to Matamata full of beautiful scenery including rolling hills, mountains, and large groves of trees. What I didn’t expect though was all the agricultural development. It reminded me a lot of Texas, there were long stretches of grassy fields full of cattle, sheep, and horses. There were pins for rounding up animals, and tractors in the fields. I had been half expecting giant forests with white water rapids running along side the road. 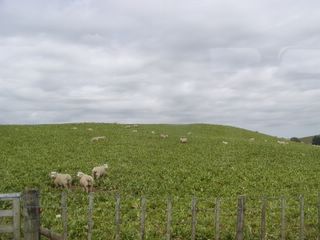 Sheep in a Field

When we got to Matamata it was obvious that the Lord of The Rings movies had contributed at least a bit to their economy. Many of the shops had round green doors painted on their windows, and the local newspaper, though having a sign on the roof clearly reading “The Matamata Times”, had painted “The Hobbiton Herold” on it’s front window. The tour center was obviously influenced as well, having built a round door with soil and plants on it’s overhang to welcome all the trilogy pilgrims.

The “unofficial” tour began as we boarded the bus to Hobbiton. We soon learned that though much of Hobbiton had been destroyed because of contractual obligations, the part that remained was saved due to inclement weather. While demolishing the area, the bulldozer driver had determined that it was unsafe to continue because of the conditions and had rescheduled the work for later. When people began flocking to the Alexander farm (where the set was built) to see the Shire, the Alexander's petitioned the movie studio to allow them to keep the remainder of the set. And so it was. 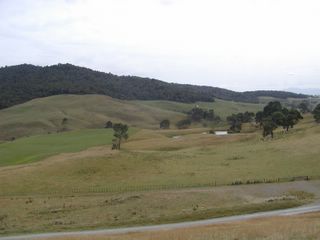 The original contract specified that all areas must be returned to their natural state after filming but due to the positive relationship that had been fostered between the Alexander's and the Studio (the Alexanders had allowed filming outside the contract area), the studio allowed the seventeen existing Hobbit holes to remain under the condition that they were the property of Miramax and could not be changed in any way (they later amended again to allow minor repair for structural saftey). So, the Alexander's were allowed to keep what they had left of the hobbit holes, but were not allowed to bring them back to the state seen in the movie.

It is unfortunate that the set is stripped of all the facades, gardens, and other structural landmarks, but it is still the only remaining set from the movie. All other sets were completely destroyed, as this one would have been had it not been for Mother Nature and some neighborly reciprocity.

As we wound through the countryside on a narrow road, we learned many more fascinating facts (if I took the time to type them all, this blog would be entirely too long!) I had an incredibly difficult time stopping myself from taking pictures. Our batteries were already low and we hadn't gotten an adequate charge the night before. When we arrived we found it was definitely worth saving our shots for the actual location. 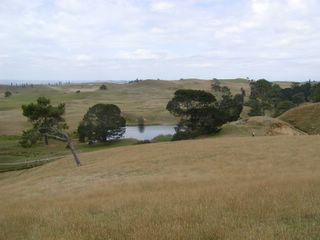 After a twisting trail to the back of the Alexander farm we climbed off the bus, walked around a small hill and found ourselves in Hobbiton. True the Hobbit holes were stripped and bare, but somehow it didn’t matter as much once we were there. It felt as if we were walking in Middle Earth.

The first view was magnificent, there was a row of Hobbit holes leading up and around a hill with Bag End on top. It really seemed as if we were strolling into a Hobbit village! 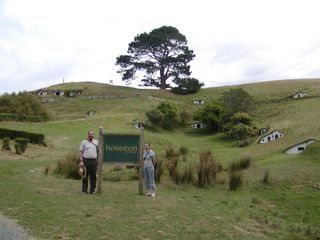 We walked along one side of the row passing several holes close up. Only one of the holes still had a chimney (the only one that was actually part of the structure), the one that was Sam an his father’s in the movie. 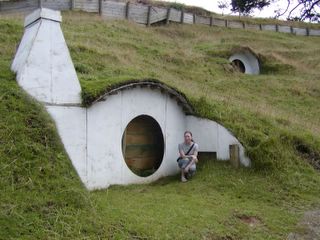 Sam and his Dad's House

Continuing on to the Party Tree and the area surrounding it that was used during the birthday celebration, we passed a large mound of flowers that as it turns out was once the hole used by Sam and his family at the end of the movie. 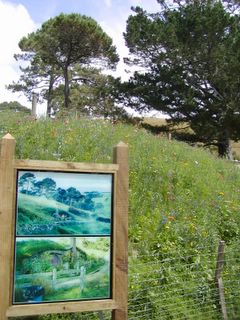 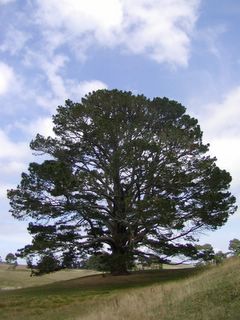 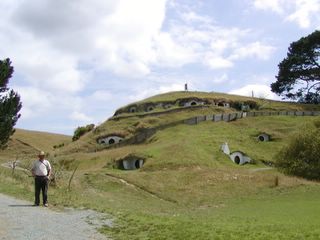 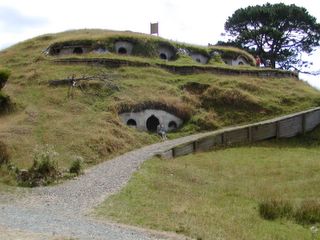 And Up the Hill

After a few pictures of the Party Tree and the pond it was up the hill to Bag End. Passing a few other Hobbit holes on the way we finally arrived at the top where we were actually allowed to go inside. It was, of course, a very rough interior, the back wall was the dirt of the hillside, the ceiling was plywood reenforced with two by fours, and the walls had the same unfinished look. Still, it was magical, especially coming out the little round door and peering down into Hobbiton. Standing outside the door where Gandalf and Bilbo sat blowing smoke rings, it was like being in the movie myself. I could almost see the Hobbits setting up the tent for the festivities. 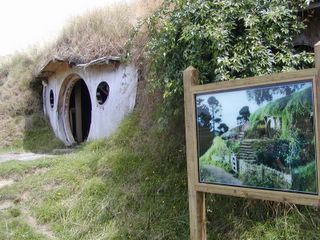 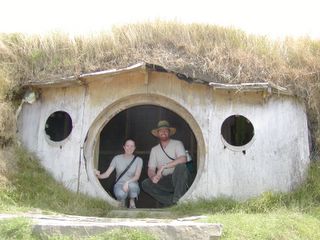 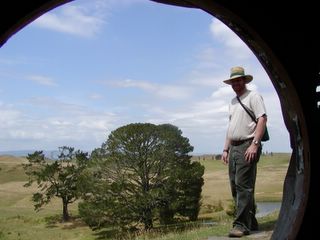 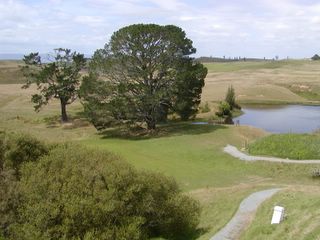 After a long break to soak up Bilbo’s house our guide took us on top of the hill where we found the massive oak tree that was at one time on atop Bag End. Peter Jackson had hand picked the tree, bought it, had it shipped in pieces, rebuilt it on sight, and added thousands of fake leaves. It appeared in the films a total of seven seconds. When asked why he did not just add the tree with digital effects, he replied that it would not have provided the proper shadows, which are actually in the movies more often than the tree itself. 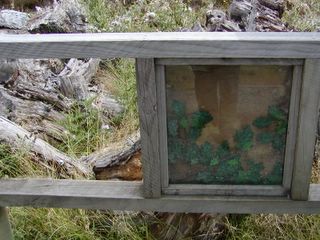 The Remains of the Great Oak

From the hilltop roof of Bag End, we walked down the other side of a small dividing hill into Bag Shop Row. This group of homes were marvelous, but many of them didn’t make it into any of the final cuts. We had a great time climbing around and taking pictures of ourselves around the Hobbit holes anyway. 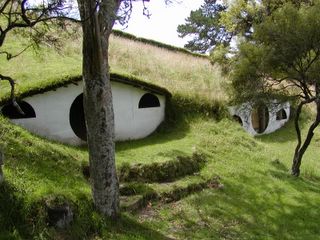 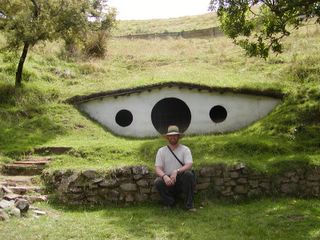 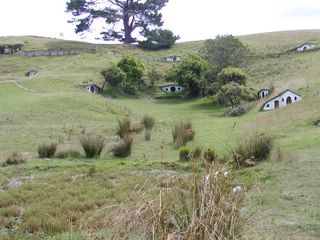 Besides the Hobbit holes there were other areas where they shot scenes such as the one where Sam says that if he takes one more step it will be the farthest he’s ever been from home. In the film they had traveled for four days. In reality the sight was clearly visible from anywhere in Hobbiton (they must have been walking very slowly). 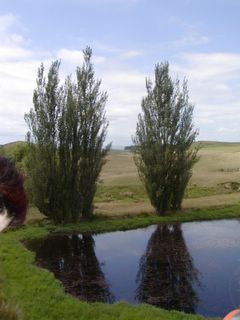 Past These Trees is as Far as Sam had Ever Gone

There is also the area where Frodo hops on the wagon with Gandalf and tells him he is late. “A wizard is never late, he arrives precisely when he intends to” was Gandalf’s reply, but the location did take them quite a while to get to. Though within sight of the filming area it was behind a deep ravine and a small swamp. They had to take the cast and film equipment to the sight with all terrain vehicles. This was the incident of filming outside the original contract limitations. 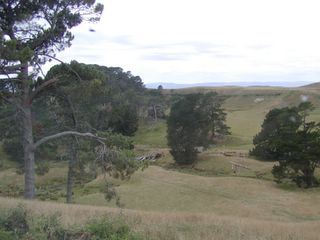 Joy did not want to leave, she wanted to move into Bag End and start raising little Hobbits of our own. I was also enchanted by the magic of the surroundings, even with much of them destroyed and the remainder sparse and seemingly unimpressive. The ruins of Hobbiton may be simple, but it is no bad thing to celebrate a simple life. 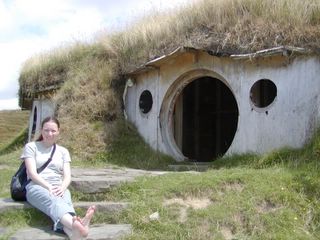 Ahhh
To all us Hobbit lovers, the Shire is a magical place. It lives in our hearts, like a fire, burning brightly, warming the hearths of our minds. Never lost, always home. I noticed the bare feet in the last picture...simple pleasures are good things. I heartily concur. There is no place like home!!

* * * * * * *
May the angels keep watch over you as you dodge the oncoming traffic!! The thought of you hurt or run over really scares this bonnie!!

I'm sure that JRR Tolkien would be envious of the ability to walk in Hobbiton and be at Bag End. I could almost visualize Sam and the old Gaffer in some of the pictures.

Tanner you should've traded in your hat for a wizard's hat, dyed your hair and beard gray and had a staff with you!

Sounds like you got a sense of the peace which perpetually resides in the hearts of those who have been touched by the Trilogy's description of the simple folk of the Shire.

Perhaps we all secretly hope to have a queer symbol scratched on our door by a wizard?

Thanks for unselfishly sharing this experience with us all.

Over the misty mountains cold to dungeons deep and caverns old We must away 'er break of day ...

I'm almost afraid to put a comment on this posting on your Blog!I wonder if it makes everyone who sees the pictures and reads your descriptions react so soulfully! You really touch a tender place in all our hearts! I too, wish to find the simple life the Hobbits lived, but age and reality tell me it is not possible now, anymore than it was ever possible ..It can only exist in the hearts of people, and the imagination of a good writer! Your writing helps us all look at life a little differently. Please don't ever stop!
Love you
Gram