This morning I watched the sun rise from above the clouds. The red-orange shrouded wisps of cotton candy seemed misplaced below the sun, yet it was beautiful. If I have ever seen this effect, this juxtaposition of sun and fiery clouds, it has never struck me like it did this morning. The morning we have begun our trip around the world.

We witnessed the sunrise on our flight to Dallas, a mere puddle jump compared to the workday long flight we are now on. Joy has had a lingering cold and did not feel well for the first steps of our journey. She took some cold medicine and was fighting nauseousness the entire morning. Only after our two hour delay and four hours into this flight is she showing signs of feeling better.

We are flying with the sun on the way to Hawaii, and though we will have been on the plane for over eight hours, it will be around 2:30pm when we arrive, there is a four hour time difference between San Angelo and Honolulu. We have been trying to adjust our schedule over the past week, going to bed late and sleeping in. We’ve even managed some catnaps on the flight, though it’s been a turbulent one. I’ve read that it’s easier to combat jet lag going east than west, but I believe I prefer having my days lengthened rather than shortened. I’ll update you later on how well this theory holds true.

Thank you all for the wonderful couple of weeks you provided us prior to our departure. We spent time with loved ones, shared moments, and yes even partied, like you can only do when you know time is short. It seems that sometimes you have to get away to fully experience what is always close. I could go on and on naming you all, but those of you who gave your love, time, energy, cards, gifts, phone calls, food, beer, musical abilities, care, and willingness to look after our animals know who you are. I hope you know we love each and every one of you and though I am posting some pictures from our going away/mardi gras party please realize that there are more of you unaccounted for than I will be able to post.

Anyway, we’re off, on our way around the world, and as a journey of 1000 miles begins with one step, ours has begun with a slightly nauseous puddle jump accompanied by an awe-inspiring upside down sunrise. 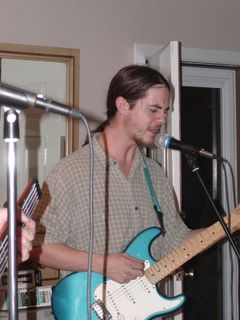 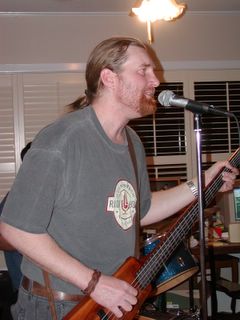 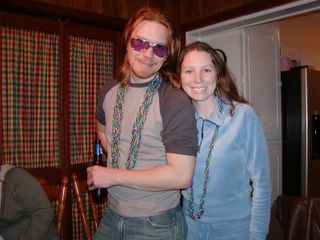 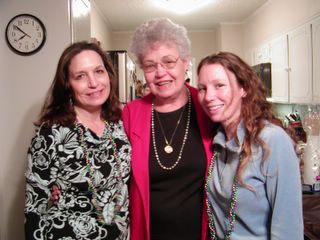 Aloha,
This morning I'm thanking the power that sustains us all that you have arrived safely. The late night phone call was a relief. I twisted and turned through the long hours waiting to hear of your safe arrival. I have done some reading about Hawaii since you left..I anxiously await news of fun and exciting activities...and some pictures. We are thinking of you, and you are a topic of conversation amongst family and friends. I emailed a rather large group of people yesterday about your trip and gave them the blog url. It helped me to share your story. Yes, I believe when we say "goodbye" to someone so important to us we then realize how much that relationship means...
I'm interested in hearing about the goddess Pele and her fiery wrath!!
E Komo Mai!
Much love,
Bonnie