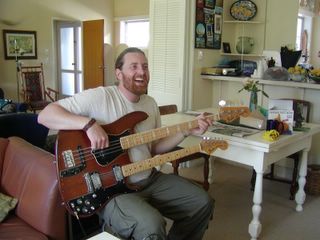 As I was saying, when I saw Graham’s Bassitar (my own name for the instrument) I knew I had found a kindred spirit. I actually have the pieces to build one in my closet. Having the idea that it would be the perfect instrument for someone such as myself that loved to play the bass and the guitar, I found a place on the internet that actually made the body for a double neck bass/guitar. I ordered the body, the pick guard and one neck from there; I bought the other neck from a company that had better prices. The plan was to buy the pieces as I needed them, but those ended up being the only pieces I bought. When started trying to put a polyurethane finish on the body and necks I quickly discovered I was in over my head, so, in the closet it sits. Maybe I’ll finish it someday under close instruction.

Back to our trip, Graham and Kay were heading to the Bay of Plenty to check up on a little “batch” that they were in the process of buying. They asked if we wanted to go along, so of course we eagerly accepted.

The trip was incredible, I finally got to see a waterfall, and the landscapes we passed through were exactly as I had imagined New Zealand. The road we were on went through forests, and beside flowing rivers (yes there were even white water rapids). 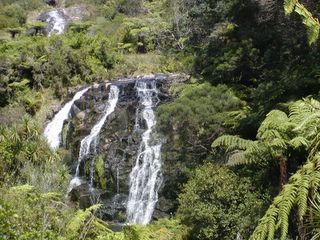 A “batch” is what we might call a cottage back home, in another context, maybe a hunting cabin. They are places built to be holiday homes, rather than permanent living quarters. They are light on insulation, but heavy on location. Anyway, the one that Graham and Kay are buying is almost directly across the street from one that is already owned by Graham’s father. We stayed at his father’s while we were there.

The location was incredible. The back of the property led down to an estuary that emptied and filled with the tide. When we arrived the tide was out so we walked across it and onto a little path that led us across a road, over some sand dunes and finally out onto a lightly populated beach (I have in fact never been to a beach with fewer people on it, it felt very private), it was beautiful. 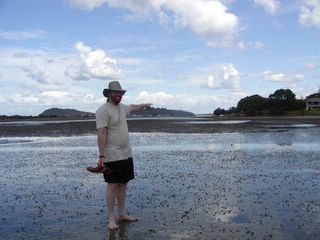 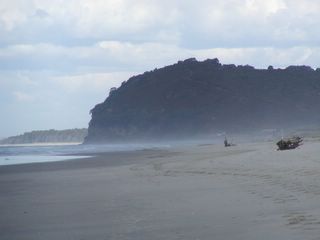 Joy couldn’t help but collect the shells that caught her eye. 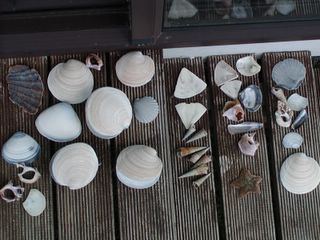 The rest of that day was quite pleasant. We helped paint some of the cabinets at their new place, ate a simple supper, played some music (everyone played a little Graham, Joy, and I played guitar and sang; Kay played a recorder flute), and examined the stars (the southern constellations are quite a bit different).

There are actually a couple of little cabins on the property, and Joy and I were given one to stay in that night. Talk about hospitality! We have been happy to sleep on a floor during this trip, and here we were with our own house. Ahh...such luxury!

The next day we woke up to high tide. The area that we had easily walked on the day before was now under five feet of water. We went out sailing for a while, than Graham tried to teach me to windsurf. He’s an excellent teacher, but his student didn’t have the best balance. I spent most of my time climbing up out of the water! 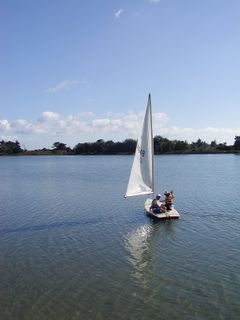 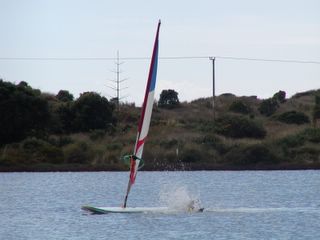 We went back to Hamilton that evening, had a wonderful meal, and spent one last night with Kay and Graham. We learned that they had walked across Spain following the course of a famous pilgrimage called the Camino Santiago Compostela. It sounded like a truly profound experience, perhaps on day Joy and I will try it. I really enjoyed our time with Graham and Kay. I found them to be interesting and inspiring. Their lives are full and rewarding, even the church they attend appeals to me, it is multi denominational consisting of Methodist, Presbyterian, and Episcopalian (I think it demonstrates uncommon spiritual depth that they manage to make such a concept work). Personally I found Graham to be quite a role model and discovered that my desire to become a teacher when I return home was further solidified by his example. 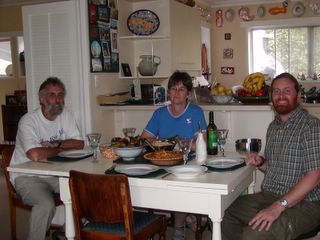 A Meal with Kay and Graham

The next morning was spent on a bus back to Auckland. When we arrived we left our backpacks in a locker at the bus station and went exploring. After lunch we went to spend an hour or so at the Auckland Museum. We ended up spending the rest of the day there and even got our own private tour by a true native Maori (I had asked so many questions at the information desk that they finally introduced me to an expert). He was incredibly informed, and could actually recite his own family lineage for twenty-six generations. I think most Americans would be hard pressed to go back four, yet we consider ourselves more advanced? We learned more about the Maori culture in that afternoon than in all the rest of our time in New Zealand combined.

After the museum we collected our backpacks and took the ferry to Waiheke Island. Liz (our first New Zealand host) had arranged for us to stay with her ex-husband Don at his place. He picked us up when we arrived on the ferry and took us out to his incredibly comfortable little house. His wife Merle was quite entertaining, being a well traveled artist, and we had a great time. 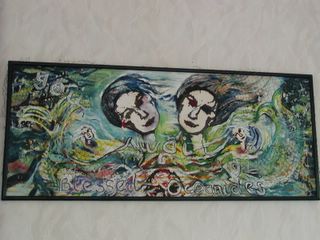 A Painting by Merle

Island life is quite relaxing, and Don really made the most of it. He spent his time fishing, boating, and boat building. He’s a truly philosophical person that, unlike so many others, has found a life that makes him happy. He had been a successful insurance salesman, that had at some point bought a modest yacht. As he spent more an more time on it he realized that he was working his life away and that if he could just simplify he could have much more freedom. He sold his part of his insurance partnership, bought into some real estate, and moved onto his boat. He and Merle ended up living on the little yacht for several years. They had no refrigerator, and could only take sponge baths, but they were free. Don is really into Henry David Thoreau, and figures that he got it right when he wrote Walden. Don believes that most people burden themselves with costly desires, and though he and Merle no longer live on a boat, they definitely live well within their means. They are truly a couple that will never be enslaved by possessions or economy. 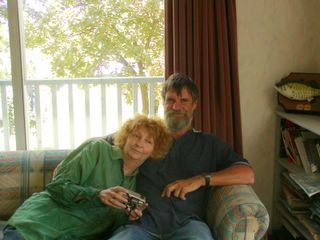 Don has a good friend named Alan that lives an even more minimalistic lifestyle. Unlike Don, he never even built a nest egg before he dropped out. He owns and lives on a boat, washes his clothes by running in place in a wash bucket, gets his electricity from a solar panel and wind turbine, and only works enough odd jobs to keep himself in rice, beans and vegetables (he’s a vegetarian). He’s very well read, clean, and tidy. He has a cell phone, and a laptop (that he charges with solar power), and considers himself a truly free man. They laugh at all their neighbors that are off working in Auckland everyday to pay for million dollar houses and yachts while Don and Alan live up the Island life in their absence. After meeting them I think they may be onto something!

After enjoying the Island for a couple of days we spent a couple more uneventful nights at an Auckland hostel. A day was spent looking at art galleries and resting up, then we were off to Brisbane. But that’s another story!

The adventures you two are having are truly life changing.. I am beginning to understand your wishes to travel! Bravo!
Gram