At three fifty in the morning we were awakened to the beep beep beep of our little digital alarm. Of course we were bright eyed and bushy tailed despite the multi-lingual party below our window until 1 a.m., we had an international flight departing at 7:45 to look forward to!

We got some bogus information from the hostel attendant...the airbus was supposed to be there at 4:35, right? Wrong. It didn’t come until after 5. To make matters worse, the hostel doors were locked behind us and so we were at the mercy of all the interesting locals that roam about in the wee hours (surprisingly quite a few).

One meeting in particular haunts my mind, a couple of Maori fellows stroll up, one in what I suspect to be a second-hand suit, the other with his hand behind his back. One grunted good morning, and Tanner replied good morning back. After a bizarre staring contest between the eldest Maori and Tanner, they continued to walk down the sidewalk and then halted about fifteen feet away to have a private conversation. I instinctively moved behind Tanner and then he buzzed the hostel desk attendant so I could wait inside while he stayed and watched for the bus. Thankfully the thugs moved on and we eventually safely boarded the bus to the airport.

It seems that a mechanical device is malfunctioning. They fix it over an hours time and then we start to take off. But instead of speeding up faster and faster, we start getting slower and slower. We taxi back to the gate and you guessed it, we wait.

Finally they let us off the plane to get some food with the free food vouchers they handed out because of the inconvenience. Unfortunately only two places accept the vouchers and there were at least two hundred people on our two story plane. So at the back of the food line we wait.

Suddenly a voice comes over the intercom to update us that we will be updated shortly. This story continues at the same speed until we finally board the repaired airplane after 2 in the afternoon, a considerable wait from the original 7:45 departure time.

But enough about waiting, now I would like to tell you about the Australian Zoo in Beerwah, home of the crocodile hunter himself Steve Erwin. Crikey! Look at the size of that croc...well, actually it was a tiger...three tigers to be exact. They were swimming around in the water at the crocoseum and chasing giant red balls and stuffed sacks that the staff were taunting them with.

After this fierce but cute display of pouncing, it got cuter. Three warm bottles of milk were brought out and the tigers instantly reverted back to their infant states. 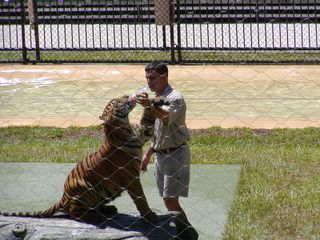 Next came the croc show which we hoped would be led by “the boss” as the bus driver affectionately referred to him, but Steve was nowhere in sight (except for on every wall, poster, t-shirt, and bill board in a seventy acre radius).

We settled for the run-of-the-mill zoo staff to entertain us by dangling strips of meat in front of a giant, vicious, terrifying croc named Norman. 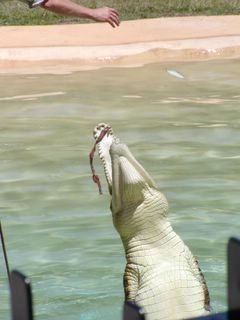 Have you ever had a cappuccino with a kangaroo? Well, Tanner has.


Cappuccino with a Kangaroo

It was one of the best zoos we have been to because they encouraged up close and personal encounters with many of the animals.

Fortunately however, they didn’t force us to pet the world’s most venomous snakes, and number one on the list was appropriately labeled the "Fierce Snake”.


Interesting Name for a Snake


The Most Venomous Snake in the World

But they did encourage us to cuddle a koala...he even left a little present on my shirt.


A Couple with a Cute Cuddley Koala

The Asian Small Clawed Otters also put on quite a show, the most dominant one was named Bonnie. 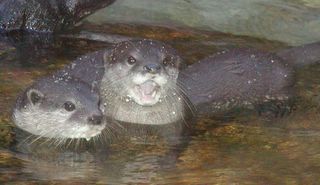 Bonnie and Her Sister Did Everything Together

Old habits die hard and people who know me best know that I love getting pictured with any gator or croc.

After the zoo, we returned to the beautiful home we were staying at in the company of Adam and Renee. 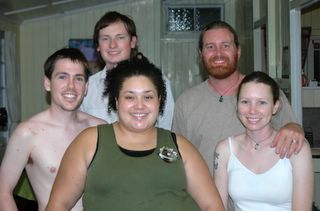 At Adam and Renee's (they're the couple on the left)

We enjoyed spending time with them listening to their music, experiencing local food and drink, and comparing regional colloquialisms. It was always entertaining to listen to their accents and then watch the baffled look blossom on Tanners face. For instance at the last hostel we were at, when the attendant informed us that we were to use shared facilities, I laughed as Tanner exclaimed “What do you mean shed facilities, do we have to go out back to use the restroom?”.

Joy and Tanner-
I ABSOLUTELY ADORE the little Koala, it is too precious...and the kangaroo is too cute. I am extremley jealous. Too bad you did get to see Steve- Criky mate!
Love you both, pet some more critters for me!!!

Dearest Joy and Tanner,
What a wonderful adventure!! The koala is too cute, and you look like a cute little momma holding your baby!! I don't suppose the koala was named Chloe???
And Tanner having cappuchino with a kangaroo!! Amazing! That zoo could easily inspire a beautifully illustrated children's book. Bonnie the otter looks like she was a real wild one!
You looked right at home with your alligator tattoo. Keep us updated with the blog when you can. Each new blog entry is a special treat.
Much love and lots of kisses,
bonnie