First off I have to apologize for being so far behind on the blog. It is very difficult to find time to write when we are experiencing so much. It is also very hard to consistently find internet connections.

Having said that Thailand provided many interesting experiences. When we first arrived we had no idea what to expect, except that Joy had read to take a meter taxi rather than the many offers we received at set prices. That was definitely good advise as they were offering to take us into Bangkok for 600 baht (about $15) which sounds about right for a taxi until you get used to the economy. Our metered taxi cost 55 baht and our driver was very happy to get a 5 baht tip so the ride ended up costing 60 baht ($1.50). Quite a bit of difference Thailand is, for the most part, extremely cheep. Our room cost 350 baht a night, 400 after we upgraded to air conditioning. That comes to about $10 a night, not bad.

Bangkok is a city with extreme duality. Our first impression was that it was dirty, polluted and impoverished. There were street venders selling food and wares on every inch of most sidewalks. If you were willing to chance it (we weren’t) you could eat a meal for 50 cents. The tap water was undrinkable (due to high chlorine we found out) but bottled water was cheap. And you wouldn’t believe how inexpensive you could haggle the products down, if you were good. At the same time the sky train and subway systems are incredible. They make the subway in New York look like a rickety old covered wagon. There are also multi story shopping centers that contain every name brand that we can’t afford, and ultra posh movie theaters on the top floor (we went to one on the seventh). Apparently Bangkok was becoming quite an economic power before the worldwide recession in the ninties.

Our first days were not spent on the nicer parts of town. We took a hop on/hop off river tour full of interesting stops. At one of the stops we wanted to go to the national museum, but found it closed. There was a “helpful” guy outside that said that he had wanted to go to the museum too, he suggested we go see the tall Buddha, the sitting Buddha, and when he found out that we were thinking of going to Chiang Mai suggested we go to a certain travel center close to the area. He also gave us advise on taking the tuk tuk’s (three wheel taxi), pay no more than 50 baht for a long ride where the driver will wait on you. He then caught us one and spoke to the driver in Thai, getting the driver to take us to four stops and wait for us for 50 baht. We didn’t realize what the traffic would be like. We saw all the sights, but after the end of an hour and a half sitting in the exhaust of cars with no catalytic converters, and being unable to communicate that we just wanted to go back to the museum and skip the last stops, we did finally made it back. Joy was of course starving and not feeling very well. 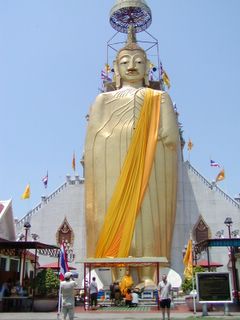 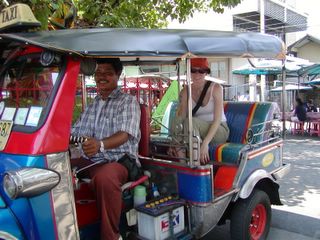 On a later stop we went to a monastery called Wat Pho where we saw the largest reclining Buddha in Thailand, and some really cool architecture. 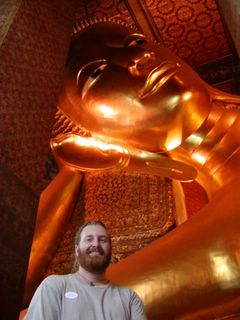 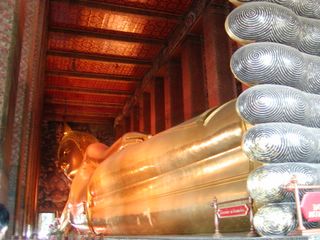 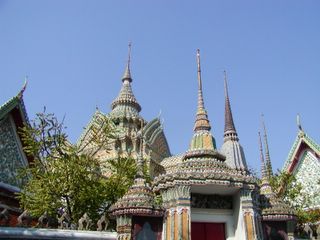 The next day toured one of the royal palaces (no longer used by the royal family) and watched some Thai dancing and traditional martial arts demonstration. 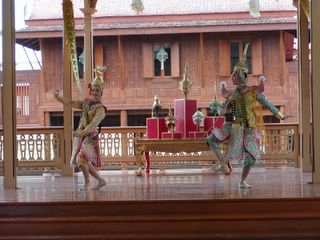 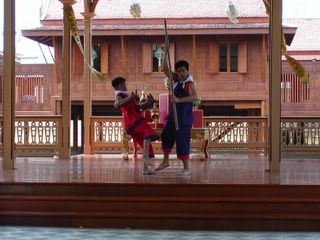 Later we went to see a real Thai boxing match. It was very exciting, Joy even enjoyed it. The boxers were quite a bit smaller than American boxers (the highest weight class of the evening was 118lbs) but the sport allows kicks, knees, and elbows, which makes it quite brutal. At the same time there was always traditional Thai music in the background that the boxers would bob and sway to that made it very artistic. The music would get faster and more intense along with the fight, and the crowd would make a noise every time the boxer they were rooting for scored a hit. Consequently it sounded as if the room would sway as they traded strikes hoo...haa...hoo...haa. We ended up seeing seven fights total, most of them went to decisions, but there were two knockouts. In Thai boxing a knockout is really a knockout, they carried them out on stretchers. 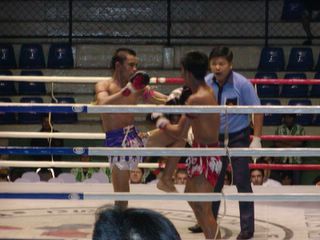 Joy had been fighting a cold for a couple of days, so we decided to spend the next day resting and letting her get to feeling better.

After some much needed R & R we went to shopping at the Bangkok Night Bizarre and watched an amazing performance of traditional puppetry.

The next day was spent shopping at Bangkok’s largest market (12,000 booths) where we bought a few gifts, shopping at the nice stores downtown (where we couldn’t afford anthing), then on a night train to Chiang Mai. We slept well on the ride, it felt as if we were being rocked to sleep in our curtained bunks.

In Chiang Mai we decided to spring for a nice room (we finally had our own bathroom), and it was like having a little slice of Heaven. I spent a nice long time trimming my beard until it was just right (you never can get them perfect), and taking a shower. Then we were off to the Chiang Mai weekend market, it’s amazing how much stuff is for sale in Thailand.

The next day we went to another smallish temple where I got to speak to a real Buddhist monk. I think I really amused him because the profound question I was pondering was quite easy to answer. “How are the robes worn, it seems to be quite an art the way they are folded to permit use of both arms?” He laughed and demonstrated folding the outer robe. He then asked if we would like to visit the Temple on the mountain. We decided to go and he secured us a Taxi. 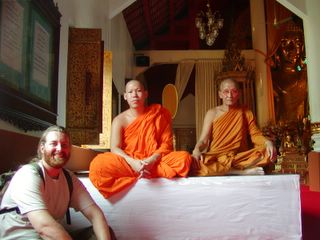 The mountain temple was very interesting. There is supposedly a relic contained in the central pagoda. One of Buddha’s bones. The view was amazing although in the heat of the season (it was sweltering in Thailand) the smoggy haze was not blown away from the city. They say at other times it is quite clear. 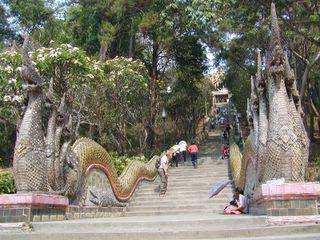 Staircase to the Temple 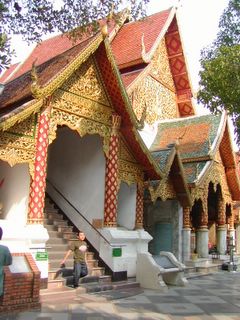 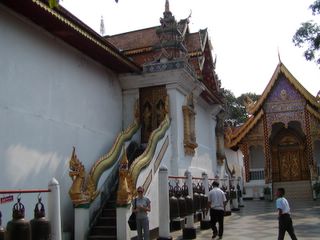 After the ride to and from the temple we napped for a while in our ultra comfortable room then went out to the night market. I have to say by this time we were getting a little burned out on markets.

The next day we went on what they called a trek. We were taken out into the country in a van with a lot of other tourists where we hiked up a strenuous hill to a somewhat primitive tribe of refugees that were apparently persecuted in China and allowed to live in the national park in Thailand. 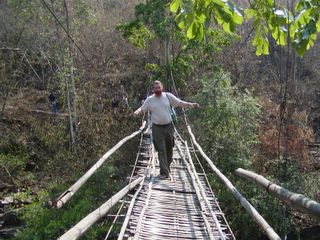 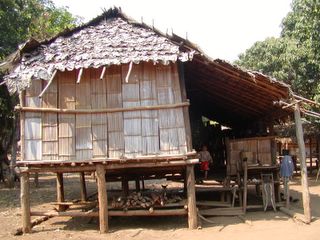 Next we were driven over to an elephant camp where Joy and I shared a seat on the back of a truly enormous creature. We could feel it’s amazing strength as it plodded along, we were no more of a load, than a woman’s purse to the giant. I think our muscles were more taxed just holding on to the seat. 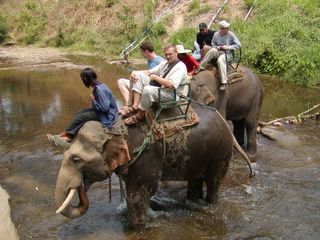 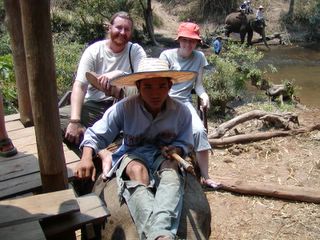 Coming in for a Landing 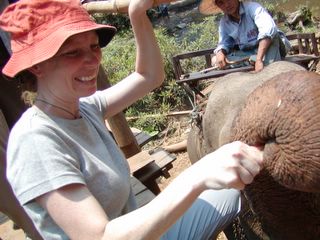 After a delicious meal provided by what seemed to be a large family (I really don’t think it was a full time restaurant) we were off to another tribe. I spent two dollars and fifty cents on a hand woven shawl that must have taken two days to make, and was swarmed by children trying to sell me hand made necklaces for 5 baht (about 13 cents). 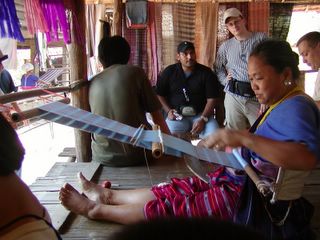 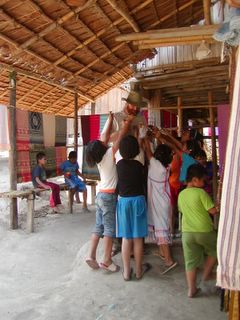 The final stops on the trip were spent in the water. We went swimming at a waterfall, then riding in a bamboo raft steered by a driver with a pole. 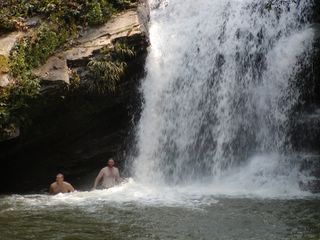 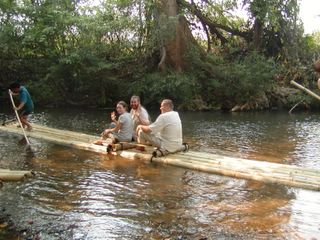 Our final days in Thailand were uneventful. An overnight train ride, and a night at our familiar hostel, before flying off to Hong Kong.

Dear Tanner and Joy,
I really enjoyed this long overdue entry....
I continue to be enthralled by your adventures. I'm sure you are seeing some beautiful and inspirational sights. I'll bet you are sharing your down home Texas humor with your new friends.
I wonder how a robe (like the monks wear) would look with cowboy boots?
much love and lots of kisses,
bonnie