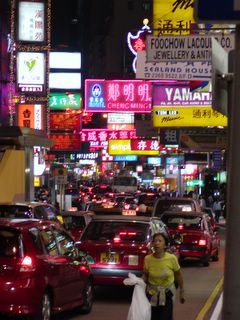 When we arrived at our hostel, we exited the bus into the Hong Kong of the movies. A crowded bustle of people engulfed us and immediately began trying to sell us a room in what seemed to be a hundred different guest houses in the same building. We had already booked a room in a guesthouse at the Mirador Mansion building, but even telling the hustlers over and over that we already had a room didn’t faze them. They tried to direct us to the wrong elevator to get us to the floor with their rooms, and lied telling us things like the New Garden Guest House (where our rooms were booked) was the same as the Lilly Garden Guest House (another of the countless guest houses in the building). When we eventually did get our room we didn’t know what to think about it. It was nice because it had it’s own bathroom and window looking out from the 13th floor, but it was also incredibly small. When I lay down on the bed my head touched one wall and my feet the other, and the bathtub was so small Joy couldn’t even sit in it comfortably.

We explored the area around our hostel, which I can only describe as Honk Kong’s seedy underbelly, before we found our way to Honk Kong Island. The Island is the wealthiest place I’ve ever been. There are so many tall buildings that they collectively mask their own magnitude. One of the tallest, eighty-eight floors, blends in with the others so well that you don’t realize that if you saw it in another city it would make the other buildings look like termite mounds (I think the tallest building in Seoul, Korea is sixty-three floors). It was also incredibly clean, almost sterile. We walked around for about an hour before we realized that there actually were restaurants around us, but they were neatly hidden inside the buildings. There were no obtrusive signs cluttering the beautiful exterior of the pristine buildings.
Posted by Noguess Family Band at 5:56 AM