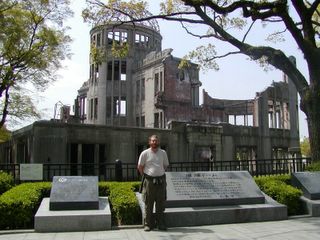 After China we stayed with Kevin in Korea for a couple more nights before heading to Japan. The first major city we went to in Japan was Hiroshima. It was quite a "tear jerker" as they say in Texas. The whole city is like a massive monument. They don't want the world to forget the power of Atomic weapons or the victims of them. The city is officially dedicated to World Peace.
Posted by Noguess Family Band at 9:16 AM